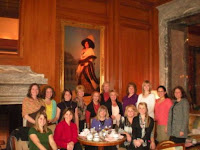 Recently I attended my first High Tea at the Grand American Hotel. It was my first time inside the hotel as well. The surroundings took my breath away.Venetian Glass Lighting, Marble and Decorative Wall Paper in the parking garage (that's what makes it a 5 star hotel). This form of tea is increasingly served in high-end American hotels, often during the Christmas holidays and other tourist seasons, and a rising number of big-city tea houses, where it is sometimes described as "afternoon tea." 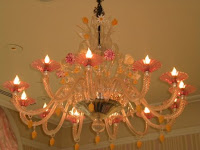 High tea usually consists of cold meats, eggs or fish, cakes and sandwiches. We enjoyed 3 kinds of dessert as well. Its called High tea because many would have the tea on High chairs and tables and therefore, the tea would be high. It was entertained in this manner because it was thought that afternoon tea would be more easily digested when sitting at a high angle to aid digestion as the abdominal muscles would be more active at that angle--silly English. 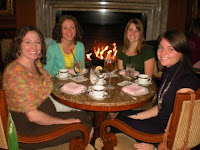 The term "high tea" is also used in the United States to refer to afternoon tea or the "tea party," a very formal, ritualized gathering in which tea, thin sandwiches and little cakes are served on the best china. 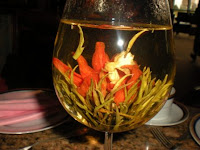 The tall glass in the middle of each table contained a jasmine flower that blossomed right before our eyes when the server poured hot water on it! 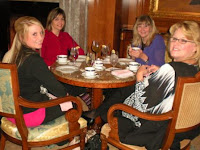 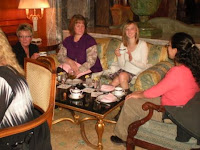 Jan,
I love this! So much fun to do with friends and family. When Melissa was 5 and Brian was 2, we went to Victoria,B.C. from Ft. Lewis, WA. with my sister & her husband. It was gorgeous there. We took high tea at a fancy hotel, with the kids :) I have a picture of the two of them holding their cups, with their little pinkies sticking out. They liked the "cute, little sandwiches". Thank you for sharing- such a wonderful experience!